Anyone who even remotely follows any technology oriented blog or website is probably well aware of the plethora of rumors and leaks that happen before any major consumer product announcement. This is more so true for rumors and leaks related to Apple. Partly to blame(credit?) for their secrecy when it comes to un-announced products — Apple somehow evokes consumer emotions — on levels that are unheard of. When was the last time CNN covered a queue of people waiting outside the Samsung store, days before a phone launch? Let’s face it, Apple did play a big part in revolutionizing the smart phone, tablets and debatably the smart watch industries.

I won’t spend any time trying to cite and verify the billion rumor claims and blurry photos of the supposed next generation iPhone — Google can be your friend if you are so inclined. Instead I will focus on one hopeful feature / innovation that almost no one talks about.

Ok. Now that you are done taking a trip out to google — to look up the rumors, or maybe you are already in the know — as nice and fancy as it may be to get a dual lens camera and lose the 3.5mm headphone jack — one thing that I really hope happens is the inclusion of carrier agnostic SIM cards. This isn’t really a new rumor where Apple is concerned — they already do it on the iPad line up — but does indeed have the rumor status on the iPhone specifically (if it didn’t, I just put it there, go internet!).

So, what happens when one travels?

I tend to travel a lot. Not vacation, but travel. This planet is the only home we have ever known and if we are ever to dream of colonizing Mars, we have to be comfortable with our home first. I tend to hop on the cheapest flight, whenever possible, to head wherever said cheapest flight takes me. I am fortunate enough to have a job that doesn’t require me to to be geographically limited to any certain area. I can be anywhere, as long as I am online.

Being online is the challenge. While wifi is prevalent in most parts of the world — it is a segregated ordeal, with signal strengths that only traverse a few feet (maybe a few 100 feet) and it’s not always as reliable as having your own connection into a wider network — namely cell phone data service.

My modus operandi when I land in a new country is to head straight to a cell phone service provider store and buying a new SIM card that is local to be able to tap into the local networks without paying a hefty roaming price.

After a few countries, you end up with a collection like this in your wallet. 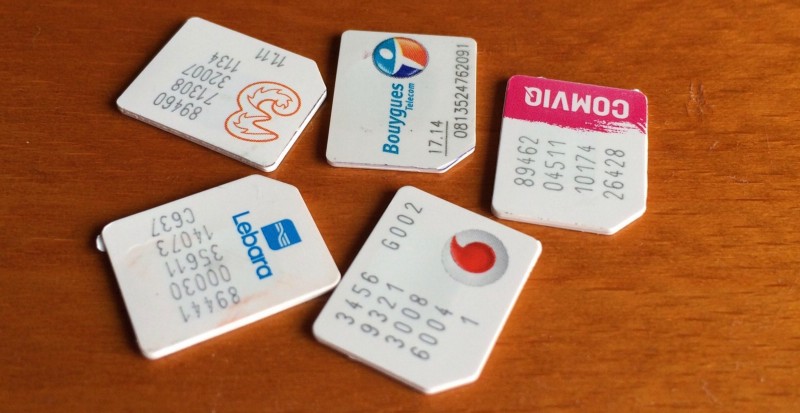 According to the GSM standard, which is what most phones and countries adhere to, all phones have what is called a SIM card. It is a tiny little removable chip that has one major function — it is, as its acronym suggests, a Subscriber Identification Module. In essence, it identifies your device to the cell networks. I tells the world who you are — well at least tells them what you unique ID is — which in turn identifies your number and on and on.

Historically, these little plastic cards are manufactured and handed out by the carrier that you sign a contract with. For example, my iPhone right now has a T-Mobile USA SIM card in it — because that is the company I pay for cell phone service. If I moved to ATT (why would I?), I’d have to make a trip to an ATT store, buy a SIM card (usually a rip off at ~$15), find a small needle to eject the SIM tray on my iPhone, insert the new SIM and then activate service on them.

This is a rare occurrence, most people do not change cell phone providers on a whim. I have been with T-Mobile USA for the past 11 years. However, sometimes, you visit places, even within the same country where a certain carrier has better service than the rest. In today’s highly connected environment, this results in anxiety and usually necessitates switching carriers, at least temporarily.

This ordeal gets even more complicated while traveling overseas. Roaming rates have always been astronomical. This piece is a little out of date, but still very relevant. We are talking on the magnitude of $15 per MB. If you do the math, watching one YouTube video, that is 10 minutes long can cost you a couple of hundred dollars.

This is mainly because carriers around the world are unable to sit down and say, hey, let’s all scratch each other’s backs and allow all our customers to freely roam everywhere. In essence saying, my network is yours and yours is mine. It’s not a technology limitation but a human arrogance and ignorance limitation. T-Mobile USA was the first carrier in the world to attempt to solve this problem by striking deals with carriers in 120+ countries to give us all free international data roaming, albeit at speeds that will make your 1997 AOL dialup seem blazing fast. Which basically means it takes the better part of a minute just to load this page.

Credit where credit is due. TMUS has to be commended for making a move in the right direction nonetheless. John Legere, I may have a man crush on you. Just saying. Follow his tweets, you won’t regret it.

This is where a disrupting force is needed. Enter Apple. Let’s be real, convincing large multinational cell phone and communications giants to play nice with each other is a fruitful waste of time. I’d rather watch paint dry — at least that process has an outcome.

Apple instead, let the networks and carriers maintain their arrogance while giving them a deal they couldn’t refuse. When they released the iPad, back in the day, they made a cellular version — one that can connect to cell phone networks directly, much like a phone without the phone feature. However, when the iPad Air 2 came out in 2014, they took it a step further and pre-loaded it with the Apple SIM.

The key here is, Apple mandated that carriers comply with a universal SIM module. The SIM module in these devices is completely agnostic of the network and can be “programmed” to be on any. When you buy the device — you don’t really commit to any network. Instead, you pick the network one you get home and set it up.

You go into the usual settings app, and you literally choose what sort of cell service plan you want. And the best part is, you can keep as many or none active at any given point of time. The real value is when you are overseas. I was just in Hong Kong and took a gander over to the settings app to see what sort of deals the carriers in Hong Kong offered — and this is what I was presented with. As you can see, when I am home in the United States, I’d use the T-Mobile plan — and then, while in HK, I can choose to use the plan with 3. What’s even sweeter was that a 2 day pass with 3 costed all of ~5 USD. YES! No more outrageous roaming costs!

I really hope and pray and wish that Apple takes this to the iPhone 7 come September. There are a few kinks to work out in the system. The main one surrounding the fact that the iPhone is a phone, as much as we all forget and ignore, the phone is the primary function. And, a phone generally involves having a number that people can reach you on. Subscription to a plan overseas would change your phone number — the tricky and challenging part would be to give the subscriber an option to seamlessly route calls from his home number to the new “foreign” number. There are a few messy hacks surrounding it — but, hey, I am excited to see how Apple handles it.

We Need A New Name

Personally, I couldn’t care less if I lost the “phone” functionality of my iPhone. I rarely make calls and receive calls on it anyway. Maybe it’s about time someone disrupted the smartphone market and renamed them — personal-smart-devices. Remember that time when laptop manufacturers stopped using the word “laptop” and started using the word “notebook” — just to avoid lawsuits surrounding the fact that they ran hot and would burn your lap if actually placed on your lap? Yeah, the smart phone needs a new name.

Written on an iPad with a Smart Keyboard with <3 from Bangkok, Thailand.

Edit: T-Mobile USA just announced free high speed 4G/LTE data roaming in Europe for the summer. While this is encouraging, it’s a limited time offer and while I hope it is extended to more parts of the world and not just for 2 months — it’s highly unlikely.